Patrice Le Guillouxwho will speak to us about Jean-Louis Fougerousse (1879-1953), architect and portraitist of Mission Montet in Tanis. About newly found archives 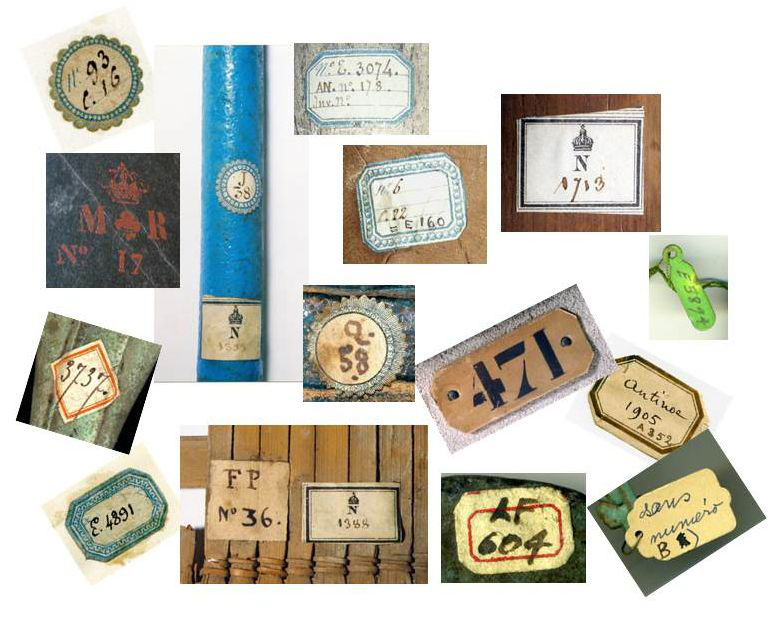 Sylvie Guichard, who will make a " focus on the complex history of Louvre inventories "   ("From Numeris")

Emmanuel LarozeOn "The system of construction by regular seating, analysis and interpretations of the apparatus of the temple of Opet in Karnak" 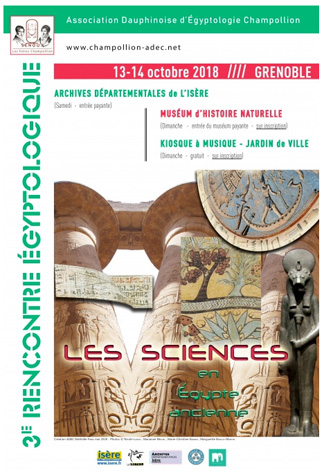 The 13 and 14 next October, our Company will participate in the 3e Egyptological meeting organized by the Dauphinoise Association of Egyptology Champollion (ADEC) of Grenoble. This 3e Meeting will take place on Saturday, October 13 in the form of conferences devoted to the theme "Sciences in Ancient Egypt" and extended on Sunday October 14 with a walk "In the footsteps of Champollion", led by Karine Madrigal.

The five lectures will be given at the Auditorium of the Departmental Archives of Isère by Marianne Michel, "Overview of the Mathematics of Ancient Egypt"; Nadine Guilhou, "Egyptian astronomy: knowledge and areas of application"; Franck Monnier, "A scientific approach among Egyptian builders"; Marguerite Morfin, "The classification of plants" and Marie-Christine Grabet, "What's new in Pharaonic medicine?".

At the end of this day, SFE will participate in the 2e Meeting Egyptological Inter-Associations. This meeting will allow to exchange with other passionate associations of art, archeology and history and to inform their members of the future activities of our Society.

Our last meeting was held on June 11 at the INHA Auditorium. Many members were present to listen to lectures by Jean-Pierre Corteggiani, Nicolas Leroux and Andrea Loprieno-Gnirs. While waiting to receive the texts of these communications in the next BSFE, you can find video passages from these three conferences:

Here are some pictures of our meeting:


Disappearance: Mr. Vincent Euverte, member of the SFE, founder of the Rosette project

After more than 30 years of experience in a multinational oil group, including 14 years in the Purchasing Department, he discovered Egypt during a first trip. Between 2002 and 2016, he goes 24 once in the Nile Valley, interested as much by the pharaonic past as by the contemporary country.

Passionate Egyptophile, he created a first forum in 2005 and a website dedicated to the study of hieroglyphics and entitled "Projet Rosette". He wants to put his computer expertise at the service of students and egyptophiles using the tools of Database.

He actively attends meetings of the “Computing and Egyptology” group (Oxford in 2006, Vienna in 2008, Liège in 2010 where he participates in a round table on the Coding Manual).

He also works, with Alain Guilleux, on the foundation of the “Atelier de Sechat” and supports the international CATS (“Children Association for Tradition and Social Engagement”) association, founded by Dr Wafaa El Saddik, then director of the Museum. Egyptian from Cairo.

Among the achievements of this project, is a book of introduction to hieroglyphs written in Arabic Arabic and Arabic Braille for young blind.

In 2008, Vincent presented The “Rosette Project” at the International Congress of Egyptology in Rhodes. Vincent's interest is not limited to hieroglyphics; it closely follows the news of archaeological excavations in Egypt and it brings together an important documentation on Egyptian museums and the museology of Egyptian antiquities.

With the same passion, he follows Egyptian news and his many trips between 2011 and 2016 allow him to document the graffiti on Egyptian walls painted after the January 2011 revolution. His latest work “The Graffiti of Liberty” constitutes a fundamental testimony on these now erased graffiti.

In 2018, the “Rosette Project” brings together hundreds of students and Egyptophiles who have online access to various tools including the Faulkner dictionary, translated into French, after agreement from the Griffith Institute using its lexicographical list.

These members contribute to the realization of a Corpus that counts around 250 texts at the moment.

Such is the contribution of an enlightened enthusiast, a passionate egyptophile, concerned with the sharing of knowledge to our knowledge of Egypt.

Vincent, all our best wishes for a good trip in the Amenti !

see in our "meetings" section

From 23 to 27 April 2018 was held in Paris on the 143th National Congress of Historical and Scientific Societies inaugurated by Frédérique Vidal, Minister of Higher Education, Research and Innovation.

On this occasion, the French Society of Egyptology was able to communicate about his activities, such as conferences and visits, but was also able to present on his stand the latest issues of the Bulletin of the SFE and Review of Egyptology .

The congress was the place of often instructive exchanges with other national learned societies, but also with teacher-researchers and students.

Our last meeting took place on 7 last March at the INHA auditorium. Many members were present to listen to the lectures of Michel Dewachter, Olivier Perdu and Nadia Licitra. While waiting to receive the texts of these communications in the Bulletin , you can find video passages from these conferences:

Here are some pictures of our meeting:

The pharaoh, the savage and the princess

Corpus is the digital portal for access to sources and research data produced at the Louvre Museum on its collections. The site makes available and allows you to simultaneously query documentary and scientific resources that shed light on the history of the collections, their knowledge and their transmission.

Links to be found in our tab of the same name, section "research aids"

Come and discover our photos and slideshows