The conferences of October 19, 2021 are available in your space member:

Stephane Polis, FNRS / University of Liège, Department of Antiquity: In the footsteps of a painter, scribe and author of the XIXe dynasty: the designer Pay de Deir el-Médineh

Dear members of the French Society of Egyptology, dear colleagues and friends,

My mandate as president of the French Society of Egyptology ends on October 15, and I have made the decision not to stand for re-election to renew the committee of our association. It was time for me to give way, as much as possible, to new representatives of our discipline, bearers of new ideas and new talents to put at the service of the SFE, both in the field of the organization of scientific meetings. which keep it alive only in that of its publications, in their form as in their content. I send all my best wishes for success to the next committee, which will meet in a few weeks, hoping that the internal elections that will then take place will bring out energetic and determined leaders, capable of taking our prestigious company much further. in 2023 celebrate its 100e anniversary, and breathe new life into it.

First of all, I would like to thank you from the bottom of my heart for the honor you have done me, on three occasions, to choose me to lead the SFE. I was able to follow and accompany his destiny for more than a decade, from 2009 to 2017 and then, after a brief interlude, from 2019 to today. This period was decisive because, to survive in an associative world in full transformation, constantly in competition with more direct and often less reliable channels which communicate data concerning our discipline, our society has had to constantly adapt, modernize, reinventing in order to provide all its members with quality, first-hand information on the progress of research in the field of Egyptology. During all these years, it has been a constant pleasure for me to organize our scientific meetings and to give the floor to the most numerous and diverse speakers possible, representative of the multiple facets of our field of research. All of them were able with talent and passion to share with us the work they are carrying out in Egypt and Sudan, from periods of formation of Pharaonic culture to the Copto-Byzantine period, both in the context of field excavations and in that of the study of archives and monuments preserved far from the Nile valley.

The recent health crisis forced us to suspend, for nearly a year and a half, these plenary sessions which gave us both the pleasure of meeting up to listen to our colleagues and then getting to know each other over a drink during the drinks. which concluded these friendly meetings. Despite everything, this crisis will have had the virtue of forcing us, once again, to deviate from the well-established and established routine of our three annual meetings. Our sessions, organized since the end of 2020 online via an internet platform, have thus seen their pace accelerate, from three to six per year. They enabled a large part of our members - living in the provinces or abroad - to attend them live, sometimes for the first time in years. They also facilitated the intervention of colleagues who, for reasons of distance and timing, would undoubtedly have had more difficulty in joining us. Finally, their systematic registration and dissemination for the benefit of members on the website of our association allows all those who could not have been present to have access to it. In the context of the return to “normal life”, which we all hope for, it seems to me essential that the SFE maintain in the years to come both this increased rhythm of its sessions, and this mixed mode of communication, associating with meetings in the presence of the members, the filmed broadcast of these, live and recorded, for all those who cannot physically reach us.

Adeline Bats, The management of cereal stocks in Egypt in the Middle Kingdom

Pascale Ballet, Tell el-faraʽin / bouto, a large urban center of the delta, from the end of the low period to the beginning of Islam 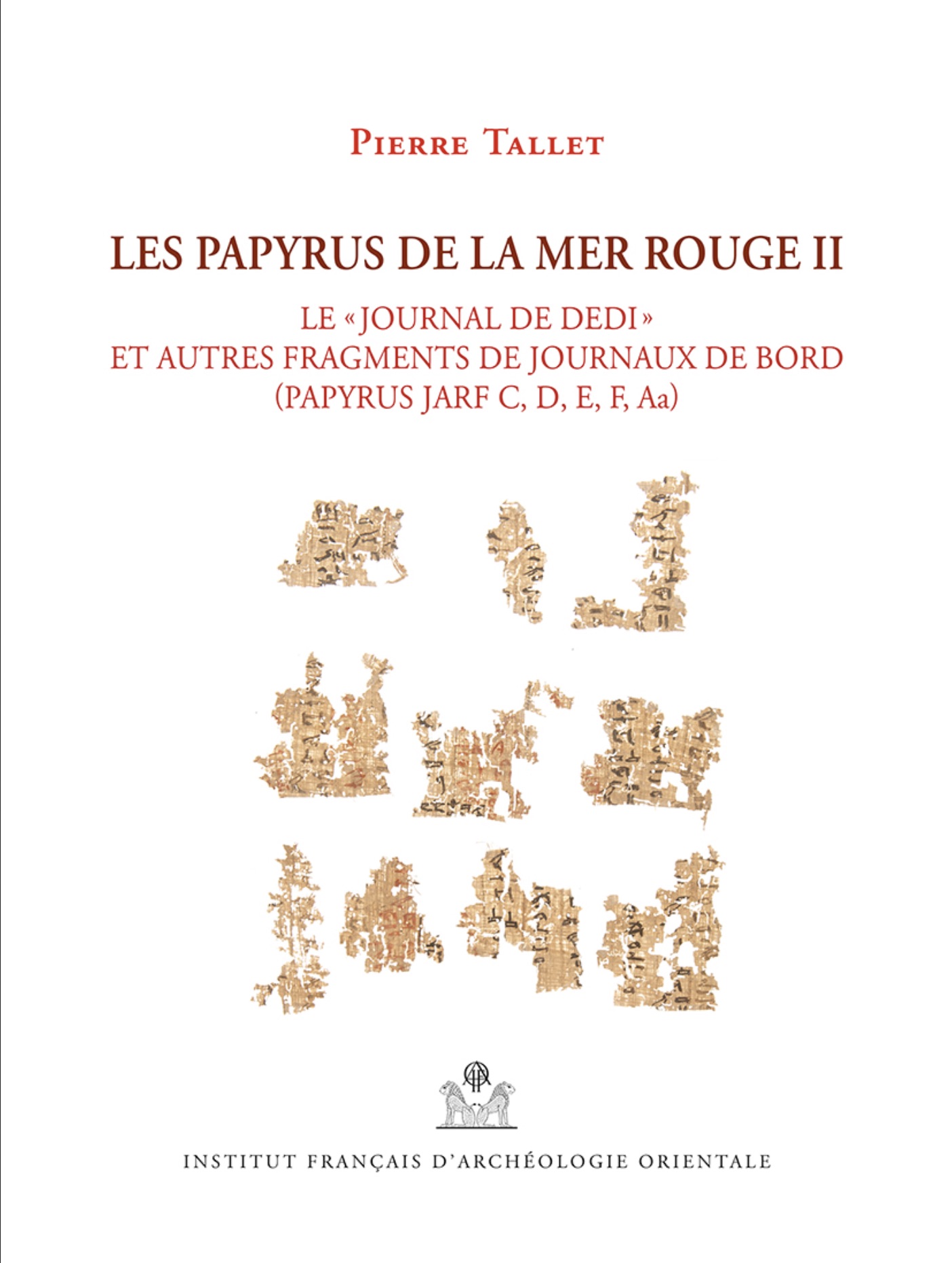 This second volume devoted to the batch of papyrus discovered in 2013 on the site of Ouadi el-Jarf (on the western coast of the Gulf of Suez) completes the publication of the logbooks which were part of this set of archives. Much more fragmentary than papyri A and B, which reported the work of the phyle of Inspector Merer in the transport of limestone blocks from Tourah to the Giza plateau, papyri C, D, E and F record other missions which were assigned to the same team, probably during a period of one little over a year. One of these documents, papyrus C, probably relates to the development of a port structure near the Mediterranean coast, and confirms the role that foundations could play.wood in the development of regions such as the Nile Delta at the start of IVe dynasty. Papyrus D, which emanates from a scribe named Dedi, depicts the activity of several phylés from the same team in repetitive surveillance and supply tasks, which are probably linked to the functioning of the temple of the Valley of King Cheops, and perhaps even of his palace, at the foot of his funeral complex of Giza. 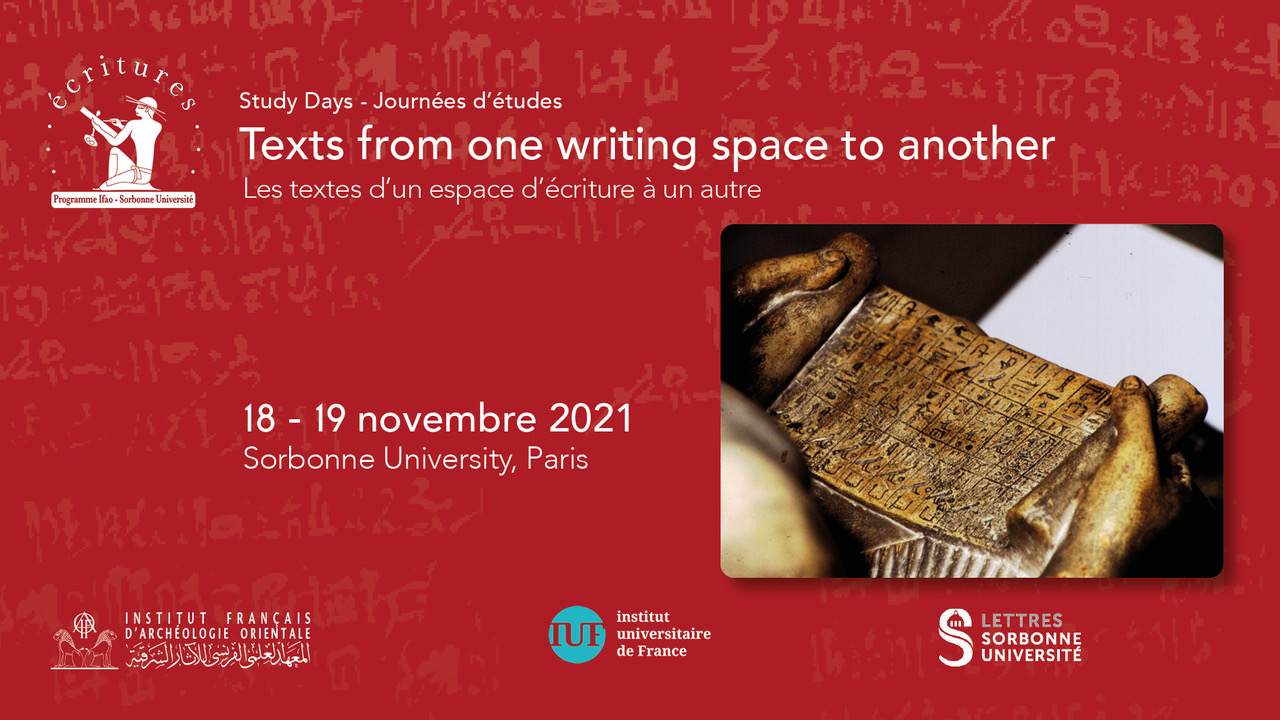 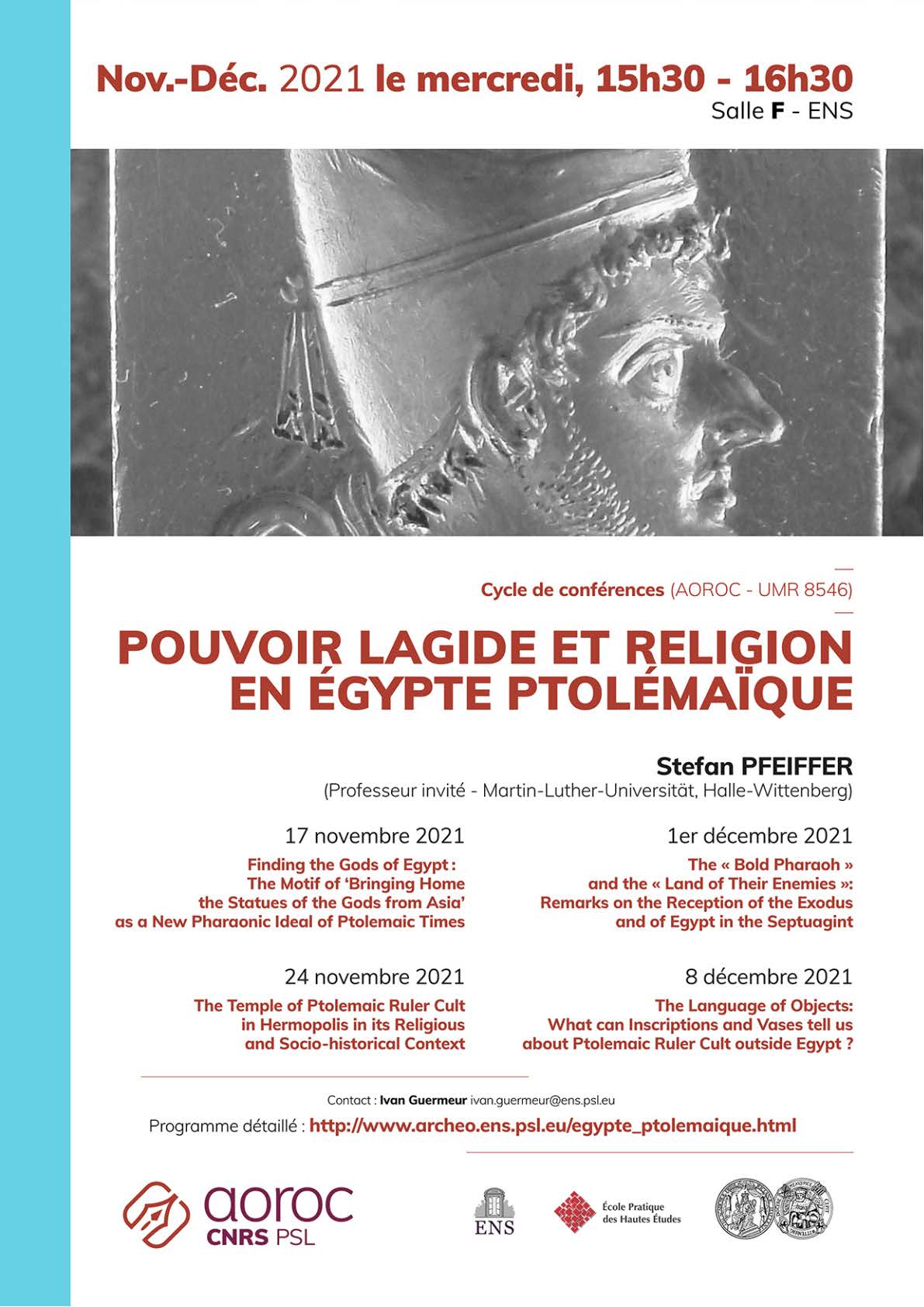 Ms. Ben-Dor Evian will speak in English while using teaching materials in French

Detailed program as well as more information on the following page: 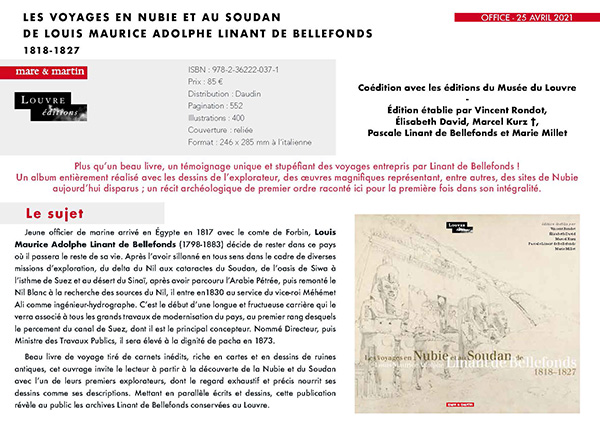 Next conference (in German) from the Cairo department of the German Archaeological Institute, Tuesday 12.10.2021 at 18:00 p.m. (Cairo time).

The talk is titled "The Monastery of Paulos (Deir El-Bachît) in West Thebes / Upper Egypt - Archeology of Daily Life" and will be presented by Dr Ina Eichner (ÖAW). No prior registration. 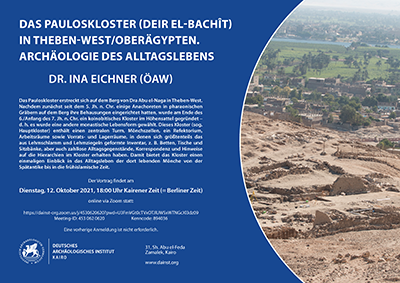 The study of Egyptian hieroglyphics as a praise of nuance, complexity and our humanity 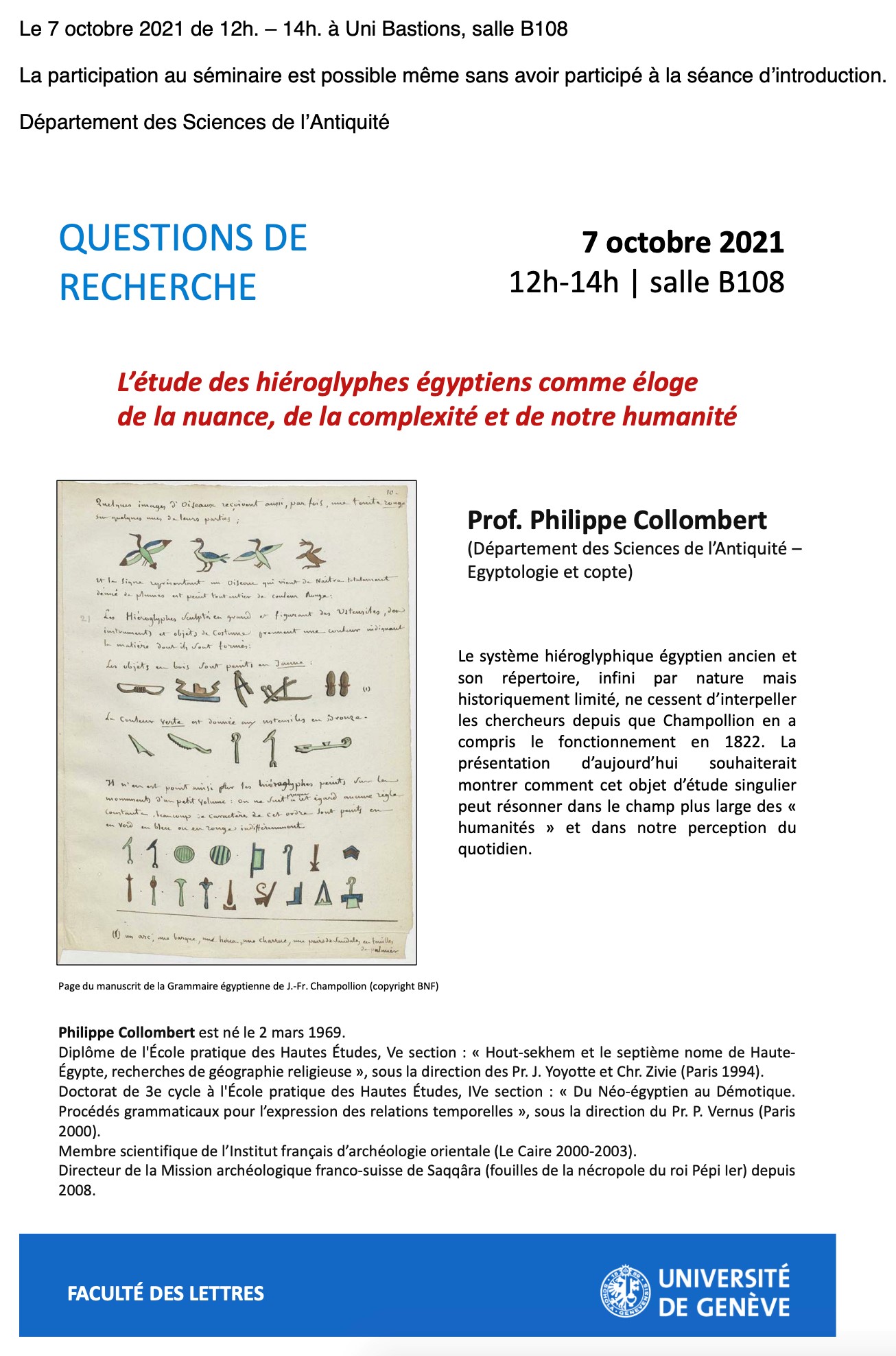 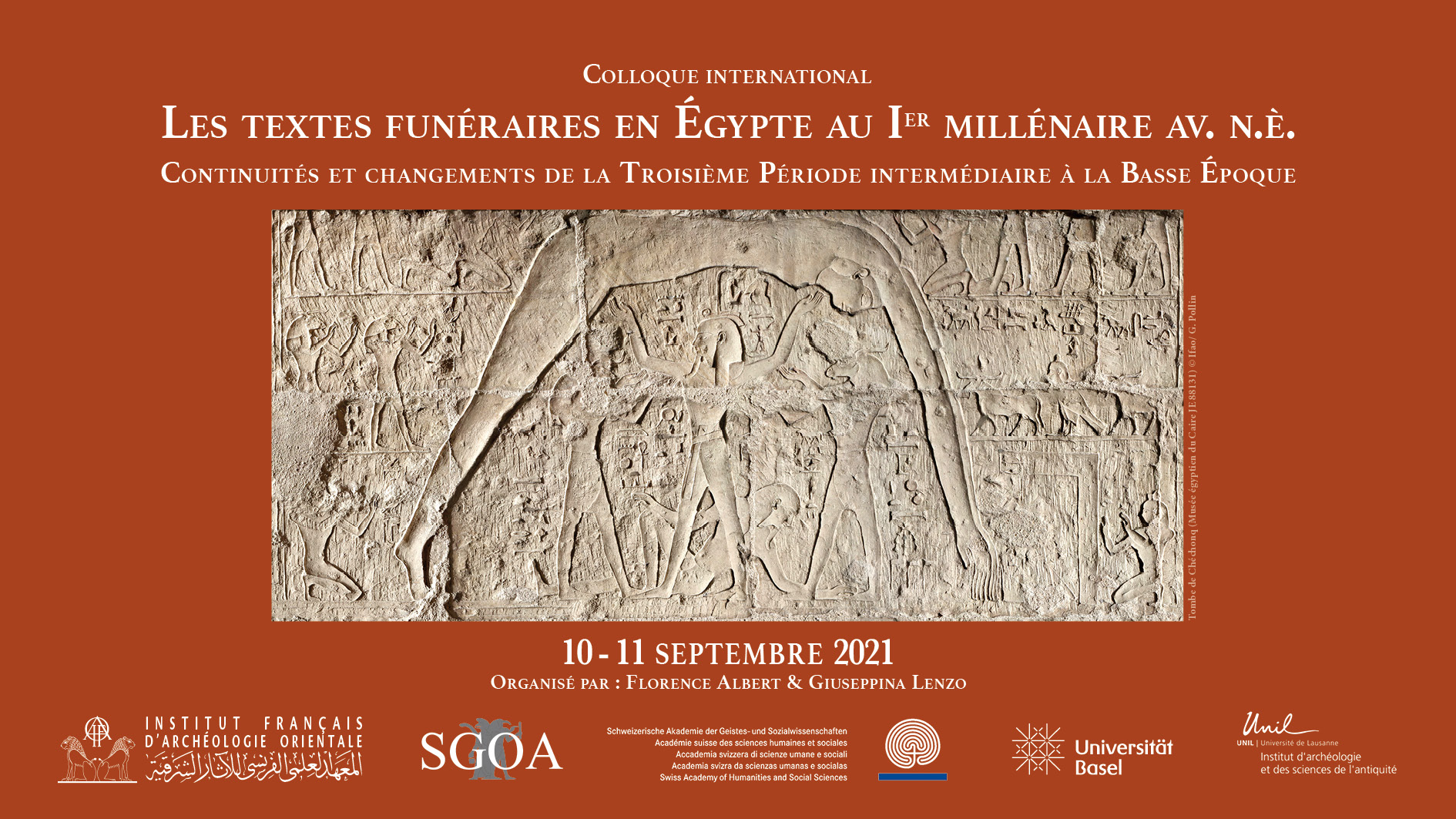 Under the research project carried out in partnership between Ifao and the Institute of Archeology and Antiquity of the University of Lausanne.

"The funerary texts in Egypt in the XNUMXst millennium BC n.è."
"Continuities and changes from the Third Intermediate Period to the Late Period"

All conference sessions are open to online participation by following this link.

Exhibition "The papyrus in all its states" 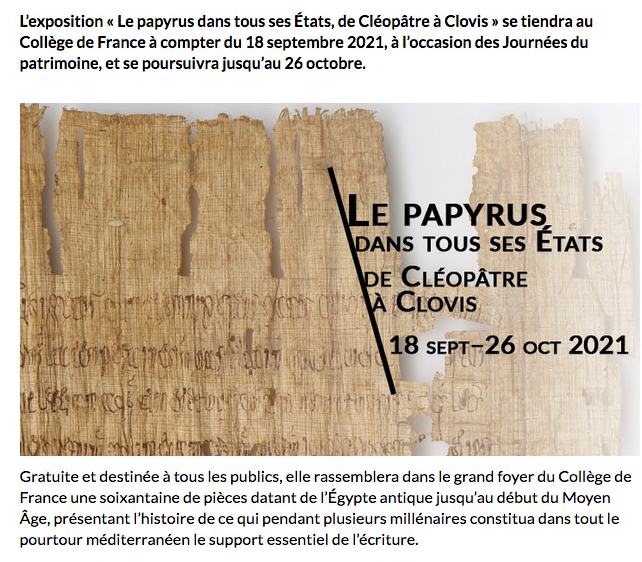 La day anniversary scheduled for September 2020 will finally take place on Saturday 11 September from 9 a.m. to 20 p.m. at the National Archeology Museum in Saint-Germain-en-Laye with conferences and workshops. The morning will be an opportunity for the new generation of researchers working on Egyptian Prehistory and Predynasticism to present their work. The afternoon will be devoted to workshops in the museum's comparative archeology room. Christine Lorre, curator at MAN, very generously agreed to open the museum's display cases and reserves so that our young researchers could present to you the most significant objects from the periods that interest us. Do not miss this face to face with the Egypt of the origins! Participation in this day exception is reserved for 50 people, in order to ensure the safety of the objects and to respect the sanitary instructions in force. Only 50 tickets are on sale at a price of 50 euros per unit. The ticket gives you access to the conferences, workshops, as well as the coffee break, the lunch buffet and the end-of-season cocktail. day.

Book here your tickets for the day Archéo-Nil anniversary 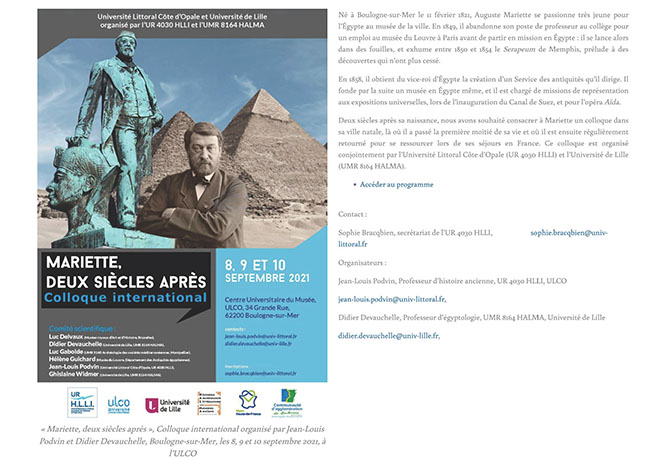 Born in Boulogne-sur-Mer on February 11, 1821, Auguste Mariette was very passionate about Egypt at the city museum. In 1849, he gave up his post of professor at the college for a job at the Louvre in Paris before going on a mission to Egypt: he then embarked on excavations, and between 1850 and 1854 exhumed the Memphis Serapeum, a prelude to discoveries that have never ceased. In 1858, he obtained from the Viceroy of Egypt the creation of an Antiquities Service which he headed. He subsequently founded a museum in Egypt itself, was in charge of representation missions at universal exhibitions, during the inauguration of the Suez Canal and for the Aida opera.

Two centuries after his birth, we wanted to devote a conference to Mariette in his hometown, where he spent the first half of his life and where he then regularly returned to recharge his batteries during his stays in France. This conference is organized jointly by the Littoral Côte d'Opale University (UR 4030 HLLI) and the University of Lille (UMR 8164 HALMA). 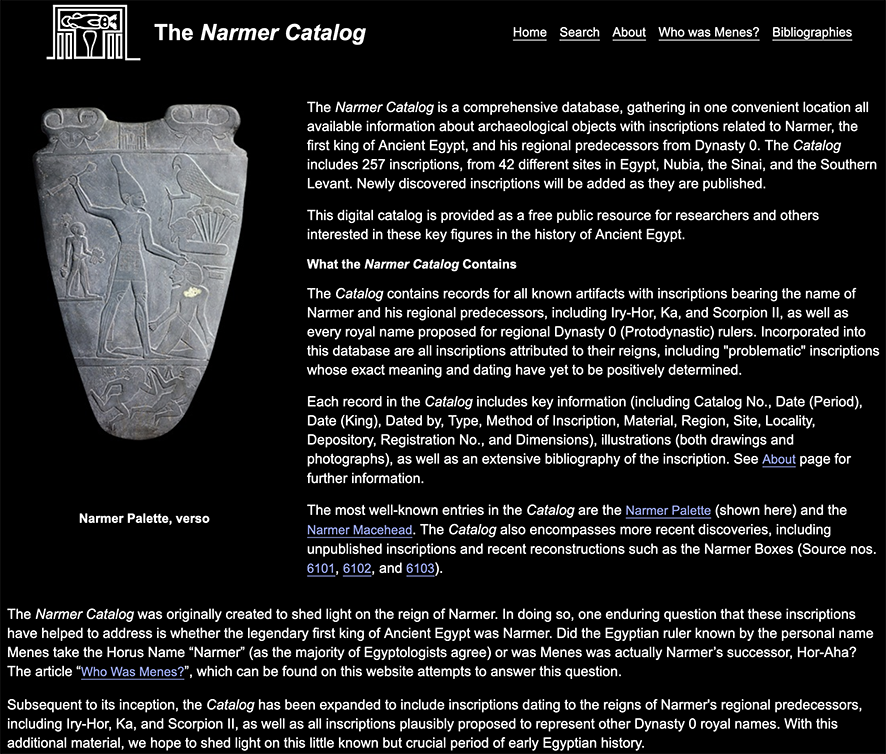 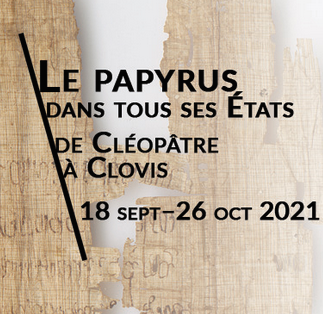 😊You can now send us your changes of address, email and phone